For updates on music and book events, find my author page on Facebook at facebook.com/nechamabrodie
Skip to content
Press Enter / Return to begin your search. 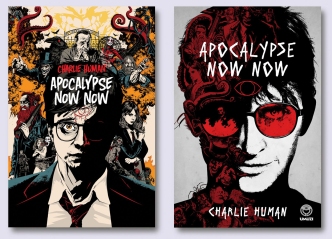 Charlie Human’s first novel will sneak up behind you and whack you on the back of the head with a very big stick. And you’ll like it. Nechama Brodie finds out how the sweet-as-pie author lured his dark side out into the open.

The first time I read Apocalypse Now Now was on my laptop. I started somewhere on a flight between Cape Town and Jo’burg, and wound up reading right through the night, unwilling to close my screen, unable to stop.

Charlie let me borrow his title for a story I wrote about Oppikoppi. He’s nice like that.

The second time, maybe two years later, the manuscript had become a book – snapped up by Random House in the UK and Random House Struik in South Africa. I got an uncorrected proof, which I had to promise to burn after reading. It had been edited and typeset, all nice and neat.

Even Charlie’s wife was surprised by how visceral the book was, when he finally let her read it. “I told her a bit about it when I was writing, but when it was a work in progress I played my cards close to my chest. I didn’t tell many people,” he says.

This is Charlie’s gift: by day, a mild-mannered digital marketing executive. By night – dusk and dawn too, probably, and maybe on weekends – an impresario of the obscene, not just wild creatures but the thoughts, gestures and actions most of us are too polite to ever voice.

Charlie says it was “one of the things [he’d] always had in the back of [his] mind – to write a book.”

In 2008 he started doing his master’s degree in creative writing at UCT. Charlie had loved fantasy and science fiction since he was a kid and got an enthusiastic response when he spoke to the writing centre’s director, the late Stephen Watson, “even though it wasn’t his genre. He was so awesome,” Charlie says.

The book “started with a very different idea – I guess it was something far more serious, a kind of epic fantasy but all imbued with social meaning.”

It didn’t make for an easy fit with the literary context of his peers, or his supervisor.

“People would critique my work, but you could tell they hadn’t read a lot of that genre,” he says.

So he made friends with a like-minded crazy cat called Sam Wilson, who was into the same kinds of [writing] things and was also doing the course.

“At that stage she wasn’t well-known as a writer,” Charlie says.

He got a copy of Lauren’s book and thought to himself: “I’m probably going to read it and think I can do so much better. It’s South African science fiction. How good can it be?”

When he finished Moxyland his response was “part OMG, part screw you, because it was so good. I knew if I wanted to do something like that I’d seriously have to up my game.”

Someone broke into his house and stole all of it.

“I’d been working on it for a year and suddenly I had nothing,” he says. “It was a real moment of deciding whether I was going to continue, or just cut my losses and do something else.”

He decided he’d carry on – but that he’d do it the way he wanted to.

He started lobbying to get Lauren appointed as his mentor, even though she wasn’t part of the faculty [she’d graduated from the same degree course, and so Stephen Watson gave it the go-ahead]. Charlie still, however, needed to ask Lauren…

At about the same time, Charlie had [anonymously] submitted a short story for a Moxyland competition, and was chosen as one of the winners. It allowed Lauren to get to know some of Charlie’s writing.

When he asked if she’d supervise him, Lauren said yes. And then she spent the next year sending back feedback like, “that was the worst sentence in the history of sentences” and “this is shit”.

Charlie says it was the start of his real education. “I really appreciated her honesty. With so many writing courses, everyone’s vaguely polite. They don’t really care. It’s not very helpful. I really trusted Lauren’s opinions,” he says, and when his manuscript started coming back with positive comments, it meant even more.

He handed in his final work in 2011. It went to two external examiners. One of them loved it, the other didn’t. “She said it was like watching several B-grade movies sliced together. And I’m like: that’s kind of cool, kind of what I was going for. She didn’t see that as a plus…” Charlie says.

Based on the feedback from his examiners, Charlie then “did some re-writes” and started pitching his book to publishers. “Lauren had tweeted a bit about being my mentor, and about the book. So as I finished there was a bit of local interest, which was amazing. People started to contact me, even though it wasn’t ‘ready’ yet.”

Lauren also introduced Charlie to John Berlyne, at the Zeno literary agency in London. Berlyne had a number of suggestions and Charlie re-wrote the book, again. “The whole process of rewriting, editing several times, it was what it really needed. Having those ‘gatekeepers’ really helped,” Charlie says.

Berlyne eventually took on Charlie – and the book – and took Apocalypse Now Now to the London Book Fair where he scored a major two-book contract for Charlie. An American deal is still being negotiated, and Charlie is now in the process of writing a sequel.

“The reaction I get from people is quite funny,” he says, of his dark material-slash-Mr Nice Guy paradox. “In a lot of ways it’s why the book was so fun to write. It’s really hard, when you’re working full-time, to sit down and write. Channelling the dark, sarcastic part of myself was quite therapeutic. There’s a lot of stuff you can’t really express in real life. That’s why writing is cool. I got through Apocalypse Now Now because it was fun to write.”

View all posts by nechamabrodie